Time with Tierra Whack is tight. It’s not just that she’s in demand, though the Philly and Atlanta-raised rapper’s profile has steadily rocketed ever since the release of her audiovisual debut Whack World in May 2018. No, it’s because she’s set to follow Lizzo’s on the Lotus Stage in less than an hour, making our backstage encounter at Primavera Sound a brief but enjoyable blur, the sense of disorientation further exacerbated by the multiple vodka Red Bulls I’ve unwisely imbibed in the lead-up.

Still, if anyone knows how to make every second count it’s Whack. Rendering complex ideas with impressive economy, Whack World featured 15 tracks all clocking in at the one-minute mark, meaning that ideas were often terminated mid-flow to arresting affect. Offering a vivid joyride through the 22-year-old’s surreal universe, songs about self-care (‘Fruit Salad’) were given equal credence to odes to dead dogs (‘Pet Cemetery’), and her versatile vocals ranged from bars rapped at blistering speed (‘Bugs Life’) to sung verses impersonating Southern hicks (‘Fuck Off’). A year on, it remains a startling introduction to a singular talent.

That’s not to say Whack’s been idle in the interim, you understand. There’s been studio time with Flying Lotus, Meek Mill and Childish Gambino, plus a string of tour dates supporting Lauryn Hill and 6LACK, not to mention the five excellent new singles she unveiled at a rate of one a week from mid-February, under the banner of ‘Whack History Month’. It’s little surprise, then, that she can now count many of her musical heroes amongst her rapidly-expanding fanbase, including Erykah Badu, Solange, Vince Staples and Andre 3000.

Playing at the far end of the festival site to the two main stages, tonight Whack will draw a huge crowd as keen to sway to the woozy, organ-led croon of ‘Wasteland’ as they are to bounce to the elastic trap of ‘Clones’. But before all that, she gives over whatever pre-show prep time she might have had to promo, first delivering a comprehensive photo shoot in under three minutes, followed by her life story in less than 20.

Sat in her dressing room/portacabin, dressed like a cross between a Beano character and Dr Seuss’ Cat In The Hat, Whack makes for vivacious and quick-witted company, despite all the ensuing protestations of shyness. Words tumble out of her mouth at a dizzying rate as she rushes to recall her roots, or reflect on forthcoming projects, though her guard never drops for long enough to reveal anything specific about future material (“Are there any more collaborations? I can’t tell you! You just met me! It’s our first date!”). Happily, she proves a lot more forthcoming on a range of other subjects. 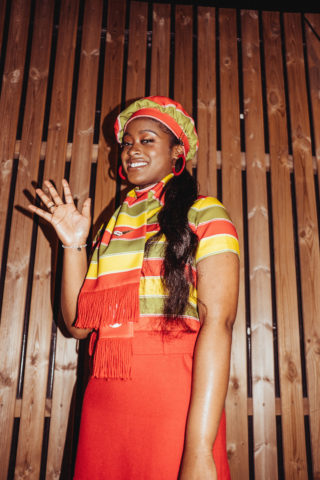 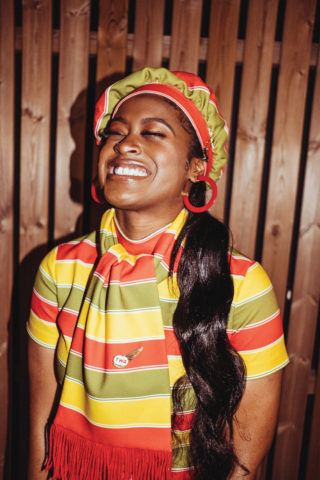 Philadelphia was a tough place to grow up

Wherever you grow up, you feel like your experiences are normal; it’s when you start to travel that you start to notice differences. So I started off in a predominantly black community, in the Projects, which is the not so good part of Philly. I grew up surrounded by a lot of family, and we stuck together, but there was a lot of gun violence and regular violence [around]. See, I’m saying regular, but it’s actually not regular. I was in the hood, but it was ok to me because that’s what I was used to. As I got older, my mom just kept moving me, my brother and sister to better neighbourhoods. And now I’m finally able to take control, I can move her to the nicest neighbourhoods.

I always gravitated towards them when I was younger. I used to stand so close to the TV my mom was like, “Back away from the TV! You’re gonna go blind!”. But the colours and looks just clicked and stuck with me. I remember watching Busta Rhymes and Missy Elliott and Lauryn Hill, Kelis, Pharrell, N*E*R*D*… All these cool people doing cool things on the TV. And I was like, “Yo, how do I do what they do? How do I get to where they are?”

I remember loving the Dr Seuss books: the colours, the rhyming words. And I always knew I could write really good, but I didn’t take it seriously. Then, I forget which grade, but I had a reading class that I took and we had a unit we had to write different types of poem. One particular assignment was to write a freestyle, spoken-word poem, basically to write anything you want, however you want, saying what you want and how you feel. And I loved that, because you usually associate poetry with having a lot of restrictions. So the assignment was to write and get up and present the poem, and I was so shy I was like, “I don’t wanna do this. Everyone’s gonna laugh at me, and it’s gonna be weird.” But I wrote the rhyme, presented it to the class, and they loved it. I had them all laughing, and I was the only person that memorised my poem.

I owe my mom everything

Because I was shy growing up, I would just stick to all the hobbies I had and keep to myself. But my mom was always watching me closely, like, “She likes this, she like this.” Once I got all that attention from the spoken-word poetry assignment I went home and told my mom, “Yo, I gotta do this.” So she went out and got me three composition books, and she was like, “Alright, if you’re really gonna do this then I want to see these pages filled.” After that I was just writing every day after school. It almost started being like a job, and my friends would be like, “Yo what you got? What’d you write? I wanna hear your new poem!” Eventually, I was like, “You know what, I’m gonna put this poem to a beat.” And that’s how it became rap. 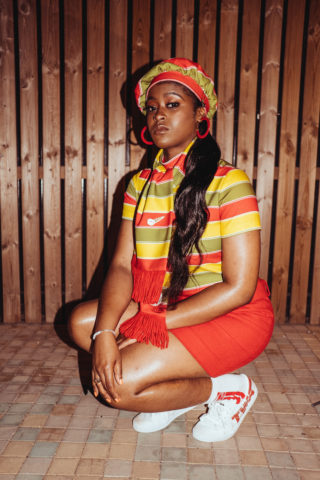 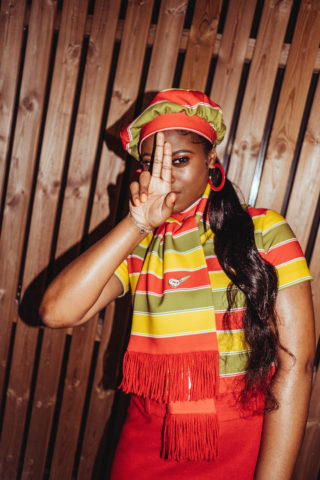 I used to draw a lot, and I was going to study Fine Art, but then I stopped because I gave all my attention to rap and singing and songwriting. I still have a really hard time articulating myself. Like, I can show you better than I can tell you, you know what I mean? Even to this day, I still see tweets that say, “Yo I just listened to Whack World and I didn’t understand it until I saw the visuals.” And I knew that was gonna happen so that’s why I put [the visuals] together. Because if you just listen to [the album] you might think it’s like a demo or something, but when you watch the whole movie together you’re like “Ohhhh!”

… but my style is instinctive

People think that I’m so into fashion but I just get lucky. I don’t talk about fashion, I just pick out nice things, like, “Let’s find something cool and fun.” Like, this outfit has my favourite colours in it, so I wore it. I love green, yellow and orange.

I had so many ideas but it didn’t make any sense to give people 30 full-length songs for my debut. Like, if you heard of a girl called Tierra Whack and you tapped her project and it was 30 songs and they were all 4 or 5 minutes long, you wouldn’t listen to it. Even right now it’s really hard for me to focus because so much is going on. Like, I want to go out there [gestures in the direction of the stage] and give Lizzo a hug, but I know I have to do this. It’s really hard for me to focus, and I don’t even do any drugs or anything! Our generation is just crazy, so crazy.

I’m happiest in my own company

I only want attention when I’m onstage, but beside that nobody has to talk to me and I’ll be fine. That’s the type of Leo I am. Seriously, it’s really hard to get me to come out. I’m like an old lady. Like, I’m the most fun but boring person. Everybody will be talking and having fun and I’ll be in the corner just playing with a trash can, having fun by myself. And then people will involve me, and I’ll be like, “No don’t involve me!” I’m a loner. I can turn it on as Tierra Whack and be the people’s person, but I only want attention when I want attention.

I’m still getting used to hanging out with my heroes

I could hear Erykah Badu’s set from the hotel yesterday and I was like, “Wow, that’s really good. I’m so mad I didn’t see her.” I mean, I’ve paid to see her plenty of times, before she knew who I was or whatever. But then I remembered, like, “Wait! I have her number! I can text her and say, you sound really good.” And that’s what I did. And then she FaceTimed me.

She’s really crazy, but crazy in a good way – just how I expected her to be. She’s magical. Like, she doesn’t seem real. I haven’t personally met her but she DMs me a lot and we talk text all the time, and I just learn. And every time she calls me she’s singing a song from Whack World. With things like that I have to pinch myself, like, “Woah, I’m really going somewhere. I’m somebody!” Because I always forget.