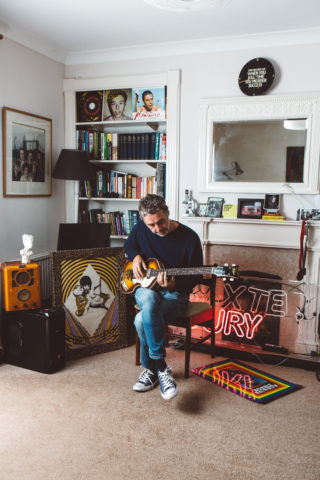 Baxter Dury has lived around Ladbroke Grove all his life, except for when he briefly moved to the small market town of Tring, Hertfordshire, in 2015. “Around Brexit it all got a bit fucking weird and racist,” he says, so he moved back and started renting a small garden flat that he shares with his 14-year-old son, Cosmo.

This is an area of town with a thousand pop culture watersheds; where Hendrix died; where indie labels began; where Carnival resets Kensington and Chelsea’s class divide once a year; where Mick Jagger looked so good in Performance; where punk was born; where Hugh Grant said “Whoops a daisy” as he vaulted a private garden in Notting Hill. “I am inherently part of this place,” Baxter tells me. “I’m jealous of the place where people who look like Kafka live, with their brown parcels and their rubbish bikes. I really am, and I can see that everyone in East London is in a big, sexual, trendy omelette of fun… but I’m not in the omelette. But I have to, by tradition, stay here. I couldn’t leave. I’ve got a stupid name and I’m from this side. It’s buzzing over there, and it’s not here anymore – it’s just pastel jumper’d tourists.”

There is no false pretence with Baxter Dury. He’s fully aware of who he is and his lineage – the son of Blockheads singer Ian Dury and artist Elizabeth “Betty” Rathmell, who met whilst studying at The Royal College of Art, with Peter Blake as their teacher. Blake remains a close family friend, which explains why various pieces of his work hang around Baxter’s flat, with more in storage.

Baxter acknowledges his privilege and is funny with it. He’s funny with everything, including his forthcoming, fifth album, even if ‘Prince of Tears’ is a true heartbreak record. Not mooning, adolescent melancholia; grown up, adult despair and the horror of being alone again. Baxter had a tough summer last year. “I almost flooded my flat with tears,” he says. “I got the Fire Brigade round to put out sandbanks around my emotions.”

He came out the other side with his best collection of songs, where he sing-speaks not unlike his father over basslines made for midnight, traditional disco guitars and strings that placate the dread whilst simultaneously adding to it. Baxter embodies a twatty wideboy who thinks he’s a gangster on standout opener ‘Miami’ and explores depression on ‘Porcelain’ with Rose Elinor Dougall and love’s obsession on the too short ‘Almond Milk’ with Sleaford Mods’ Jason Williamson. There are smirking one-liners throughout, and the heaviness of love gone wrong. All written here in this modest flat in West London, although it could have easily come from your nearest big, sexual, trendy omelette of fun. 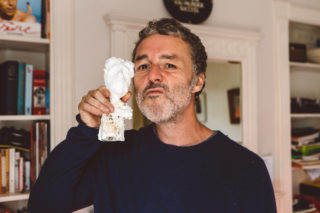 “This is my stepmother’s attempt at making an impression of me. I don’t really know what happened. I probably bailed out of it. I reckon I was around 14, because I’ve got this mad Chiswick afro – a post ecstasy haircut from the late ’80s. Even thought it’s incomplete I’ve kept it, because I’m sort of incomplete. It’s more representative that way. My stepmother, Sophie Dury, is from another big lineage of artists (her dad was the pop artist Joe Tilson). It goes on and on. We’re all a total conspiracy of cunts.” 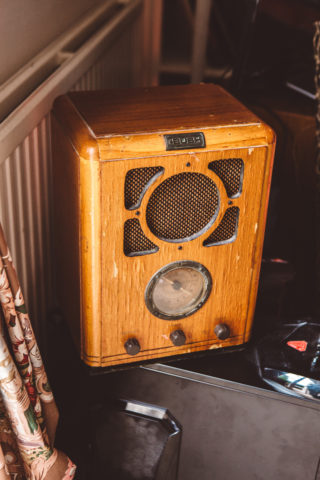 “This is a fake radio, really. I love it. It’s total bullshit. It looks really old, but it’s not at all. It looks depressing and it only plays Radio 4, which is depressing. What I like about Radio 4 is that it’s a relief from everything. I find it celebrates the morose quite a lot, and that can be a bit oppressive, but it’s all I listen to. Radio 4 is fucking brilliant though, isn’t it? And fucking hilarious.” 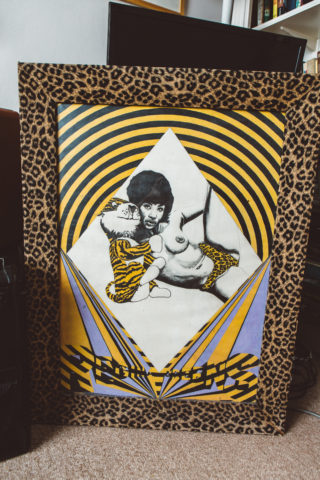 “I used this as a record cover [2001’s debut ‘Oscar Brown’ EP] but it’s one of my old man’s paintings from the Royal College of Art, when he was being taught by Peter Blake. It sort of looks like a bloke, I think. I remember the NME called it ‘An unsavoury man in a pair of knickers.’ A lot of my dad’s paintings were really rude. This isn’t rude at all – they were usually really aggressive and they really swore. He was into naked black girls, basically. This is probably from the early ’60s so it would have been quite shocking. I mean, I think they all had a right laugh. You’re going to college next to the Albert Hall with Peter Blake as your teacher – you can have pretty much the best time you can imagine.” 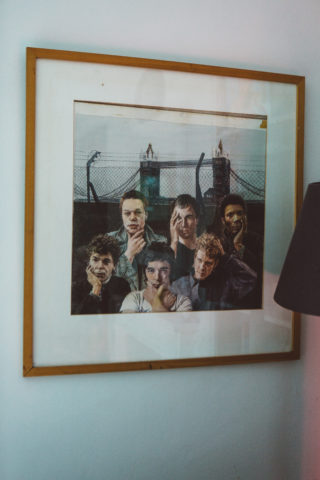 “My mum was more of a traditional painter, and my dad really wanted to be more like her. He couldn’t compete, because she was really skilled. He was skilled, but more in design, and not on the same level as her. So this is dad’s first album cover, which my mum painted, when he was in Kilburn And The High-Roads. This is the original, painted from a medium format photo.” 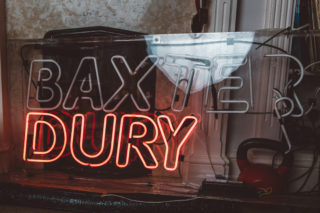 “This is a sign from when we supported Pulp at Brixton Academy when they reformed in 2012. It didn’t even survive the gig. The Baxter bit broke instantly but the Dury bit still works. I don’t think anything survived that gig – our drum kit fell apart. It was one of the worst gigs you’ve ever seen, and Pulp were so nervous about doing it, it wasn’t actually a very nice experience.

I’ve become quite good mates with Jarvis and I went to see him do his show with Scott Walker the other day, and that was fucking amazing. He was with Scott Walker afterwards and I didn’t even know it was him. I thought it was just some homeless bloke. I thought, that was a weird dude, and then I saw a photo of him and was, like, ‘fuck!’ I’d been stood next to him all evening. I thought it was some annoying, moany bloke. I was like, ‘ok mate, can you go away. Jarv, Jarv, do you want a drink, Jarv?’ Being all obsequious.” 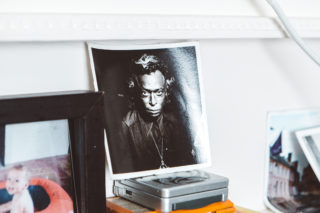 Richard Dumas is a fucking incredible French photographer. He’s quite a strange cat. There’s something over sexualised about him. He might have an avocado in his pocket, if you know what I mean. He’s got a sexy vibe going on. He takes these amazing photos, and every now and then I’ll see him and he’ll give me one. Like, [adopts French accent] ‘I just found this. No one has it. Here, it’s for you.’ This is the last one he gave me. It says on the back it’s from 1989. Mile Davis was really angry when Richard took that, like, ‘What the fuck are you doing!?’ But how do you take that photo, that quickly? This guy is unbelievable. 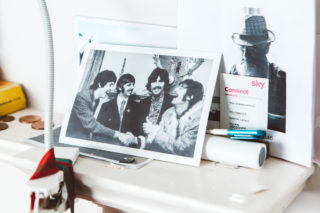 Postcard of The Beatles

I’ve met Paul McCartney once, at Peter Blake’s 70th birthday, where he was given the Albert Hall for a party. It was incredible, with all these people from Peter’s life, from Twiggy to Paul McCartney. I said, ‘oh, hello Paul,’ and all he said to me was, ‘Ooooooh.’ But he went round to dad’s quite a lot when dad wasn’t well. He just suddenly turned up. ‘Hi, it’s Paul, do you mind if I come and visit you.’ My dad sat there all his life coating off The Beatles, but when he turned up he was like, ‘I love The Beatles.’ All our lives he’d criticised them, and then Paul comes round and makes a cup of tea, and suddenly it’s, ‘He’s a lovely geezer. British architect of modern music.’ Paul even came to my dad’s funeral. 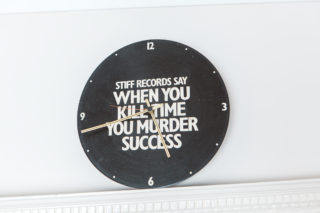 This is the office clock from Stiff Records, which I nicked. Stiff was built around bands that couldn’t get signed anywhere else – people like dad and Elvis Costello. There’s a good documentary about the tours they did in the late ’70s – an ill-fated one on a coach, and then one on a train, where they chartered a train and went around the country. Imagine doing that now. 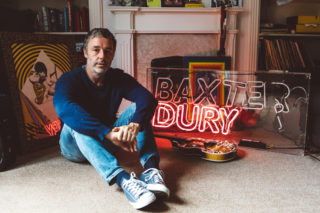 Hofner gave me this. When you hear it, it all makes sense with the Paul McCartney thing. They’re really melodic things, and cheesy in a way. My son’s recently started picking it up, and he’s become completely obsessed. I’m shouting go to bed and you can hear all these Beatles basslines, and hearing them again, they are incredible. But what I’m trying to persuade my son to do is play all instruments. He’s way beyond where I was at his age. He’s in the game already, I think. It must be impossible to ignore, when you’re a kid and your dad plays music and your grandad did. How attractive that must be. It took me a long time to come around to it, but I had a totally different set of ego-centric circumstances around it. My old man was fucking crackers and he was allowed to be, and that was fine. I’m more a sympathetic, new generation dad. Dad was a thousand impulses and didn’t really know what the fuck he was doing; I’m more aware of it and trying to give Cosmo more choices. Around dad you didn’t have many choices. It was all about him. 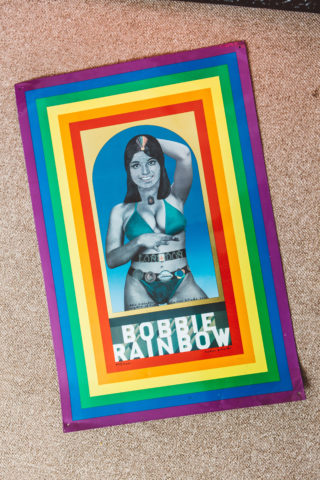 That’s a Peter Blake. The original in the 1960s was called ‘Babe Rainbow’ and he made some more prints on sheet metal in 2000. They’re female wrestlers. Peter was obsessed with wrestling, and he’s always giving stuff away. The positive thing about being related to artists is that you get a lot of amazing stuff. 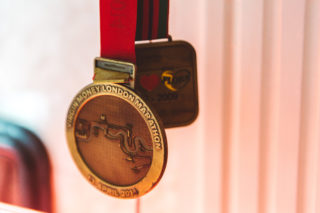 I’ve done two marathons. The first one [2009] I sort of enjoyed, and then the second one [2014] I fucking hated it. I’ll never do it again. 40,000 of the most positive bunch of cunts you’ve ever met. I do weird things like that. On the last one, I stopped halfway through and went to the Red Cross to the medical tent. I thought, ‘fuck it, I’m going to feign an injury because I hate this so much.’ So I stopped at the medic and was doing all this shaking, and as I was sitting there some indie dude came up to me, all happy, and the only time it’s ever happened he said, ‘I love you so much, and it’s so amazing that you’re running for charity,’ and I was thinking, ‘fuck off mate, not now! I’m feigning an injury.’ But he carried on, so I jumped up, pushed the woman off me and carried on running, like, ‘you fucking bastard!’ And I finished it.

What they don’t tell you about the Marathon is that at the end you go into this weird palace area, where people are all passed out and being treated with defibrillators, but by then you don’t give a fuck about anyone. It’s like surviving a ferry disaster. You’ve got no empathy anymore and you’re kicking defibrillators off people.

There’s a chip in your shoe that triggers photos at different points, which you can buy at the end. The only one people bother with is the one crossing the finishing line, but on mine my face looked like a melted wheelie bin.