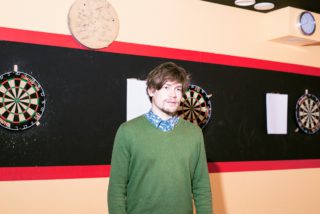 Some lo-fi garage rock from Teemu Tanner, who is also part of Finnish band Teksti-TV 666

If you haven’t seen Finnish punks Teksti-TV 666 live then you’re missing a trick. At some points there are four or five guitarists on stage wind-milling their hair as if they’re in Pantera, but sounding more like Jay Reatard or Mac DeMarco. Some look like death-metal kids in the wrong band, others like they’ve stepped on stage from the local skate park. All of them look like they’re having an absolute ball.

Teemu Tanner – otherwise known as Kynnet – is one member of the band, and on Friday (19 May) he releases a new 7″ single, ‘Alaovi’ via Black Pop Records.

Tanner explains about the song: “I had some spare time being unemployed during one summer and I had an 8-track. We spent that summer at my then-girlfriend’s parents’ place, hiding away from an awful pipe repair at our own home. We eventually broke up during that summer and it kinda gave me the direction for all this that I do under the name of Kynnet! Being honest and spontaneous.”

If you like it, you can pre-order the release.