"Moist sounds from the underground"

If you look at some of the most exciting and innovative music that has been coming out in Sheffield in recent years – from The Eccentronic Research Council to International Teachers of Pop, via The Moonlandingz – then you’ll quickly see a connection between them all. Largely in the form of the creators Adrian Flanagan and Dean Honer.

While ITOP has already brought us one of the year’s most infectious electronic pop records, Flanagan already has his head back down with eyes burning into his synth keys to come up with yet another new project – one likely to bring up some rather unexpected Google search results. Adult Entertainment is the duo of Flanagan and Charlotte Cannon. The result is a woozy, pulsing, grubby coalescence of dance-floor ready electronica that sounds like a hallucinatory piecing together of being in a windowless basement club for three days straight.

So it seems only suitable that the pair would head to Salford’s very own den of iniquity and party-haven The White Hotel to shoot their first live sessions for ‘Lick If You Like the Line’ and ‘The Stash’, both of which feature here as premieres. Here Flanagan and Cannon also talk us through their new project, which they are dubbing: moist sounds from the underground.

L&Q: How did you meet and come to work together?

Cannon: We had a few mutual friends and Adrian was looking for someone to do a new project with and heard my name about, as I was doing my solo stuff and had been working with a few different folks. When we met up and got on like a house on fire and realised quite quickly we made a pretty good musical cocktail.

Flanagan: I stalked her out! After we took The Moonlandingz off the road I wanted to get a few other new projects on the boil and a few people I trusted mentioned Charlotte, so I got in touch. One project was ITOP and the other was to do something a little more wayward. I see her as a highly charismatic and quite unique front person – she’s young, positive, open-minded and got the hunger which makes it more of a pleasure to do. I’m old and I’ve seen many people get jaded by this industry but I’ve still got the same passion and enthusiasm for it I had when I was a kid. ITOP started building traction and then the debut album came out really quickly so I ended up having to ride the wave of that and what I started doing with Charlotte got put on the back burner for a little while.

Was there an aim or mission statement for this project?

Flanagan: I think after the first session we knew we didn’t want to do a pop thing or an indie thing, we wanted to do something that was a bit more cerebral – raw and a little primal – something for twilight people to lose their shit to either at home with their headphones or in an after hours basement.

Does the name Adult Entertainment suggest you’re shooting for something a bit sleazy?

Flanagan: Music is so safe and wet nowadays that someone had to make music and words sexy again. I think it’s possible to do that without turning into a Barry White meets Roy Chubby Brown hybrid. Adult Entertainment is just that though – it’s Adult Entertainment. It’s not music for children, we write about adult themes and, again, it’s liberating not to have to think in terms of making music purely for what works for so-called commercial radio.

This is why we wanted to put out this peculiar filmed live session as our first introduction to this new project rather than the usual ‘bung yer best poshest track on Spotify’. It was important that the first thing people heard or saw of us was something raw, loose, imaginative and organic – like a newly hatched egg. Plus, I think by keeping the live thing semi-improvised it leaves us with more space to take the same tracks into other places when it comes to putting the definitive recorded music out. We filmed the live session in the UK’s most exciting and depraved night club, The White Hotel in Salford, which is where Charlotte was living when I first met her.

Any touching points or references for the music?

Flanagan: I guess Cosey Fanni Tutti, ‘Jack Your Body’ by Steve “Silk” Hurley, the more psychedelic hip-hop from the U.S like Shabazz Palaces, Adrian Sherwood’s On-U Sound records, a lot of weird foreign language space disco, the first albums by Moloko, the Flying Lizards, Suicide and a lot of early Warp Records – the Rob Gordon years. It’s most important to never ever do anything that can be described as earnest or serious though. I hate that, when musicians go from being these glorious heroic rock ‘n’ roll fuck ups to then calling themselves serious artists, walking around with some incredibly intellectual paperback in their coat pocket, that they never really read, whilst a string section beckons them on the horizon waving their musicians union cards and session fee invoices at them.

How’s the songwriting work between you? Who does what?

Cannon: It all depends on the song, it’s pretty even. Usually Adrian would come to me with some mega signature Flanagan synth sounds or a banging chorus hook and I’d spread my lyrical content and melodies over the top of them.

Flanagan: When we started writing I just got all the old analogue machines out, sparked up the 808’s, 909’s, 303’s and a bunch of vintage synths and sequencers and then semi-improvised something that in my head was a bit acid house. Because it was put together live by someone who doesn’t really know what he’s doing there’s drum machines going slightly out of sync with each other and machines always on the brink of collapsing and doing stuff that they shouldn’t. This madness ended up sounding more like acid house done by Daniel Johnson but Charlotte encouraged me to keep it raw. Charlotte has these little notebooks filled with these weird Burroughs-esque phrases she’d written and she would just improvise some of them over the top of the tunes – which I loved – and I’d then come up with silly little chorus ideas and we’d bounce off each other like that.

Cannon: Adrian has a dog called Klaus who is one hell of a licker and he kept lapping at my hand as I was circling lines in my notebook that I thought would work. So we asked him, ‘klaus, lick if you like this line’. “

Flanagan: Yeah, we used my dog’s tongue like a canine equivalent of the cut up technique. ‘The Stash’ is my lyrically economic ode to a dream I had about Charlotte walking around people dancing in some packed sleazy nightclub, picking up lost bags of drugs at their feet and going, “are you looking for this – The Stash?”

What are your future plans for the project? 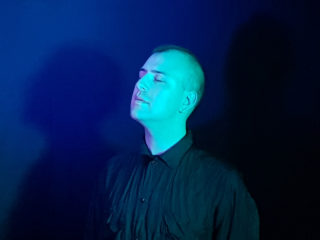