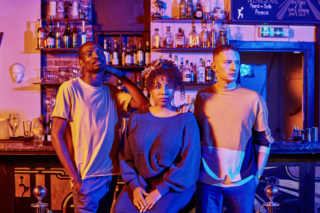 Their new album is an ode to London's nightlife

London’s nightlife is dwindling, or so the common perception goes.  Joshua Idehen, Shanaz Dorsett and Tom Leaper would know whether it is or not. The three friends, who make up Benin City, have been part of it for the past decade – both as ravers, bar workers and musicians. Their forthcoming album, set to come in 2018, is an ode to the capital’s nocturnal scene.

Before that though, they’ve shared a new track and some news. News, first. The trio have signed a deal with Moshi Moshi (Wesley Gonzalez, Girl Ray, Anna Meredith). The label will release the follow-up to their debut project ‘Fires in the Park’.

Secondly, a new song, the grimey, dark, throbbing, pre-dancefloor tune ‘Take Me There’.

Here’s some words about it from the band:

“We always felt the album should start with something about that giddy anticipation when walking into a club for the first time – that feeling as you walk through the double door and bass fills your knees and everything is potential and everyone is interesting and dry ice and strobes are in the air.”

Order Benin City’s ‘Take Me There’.