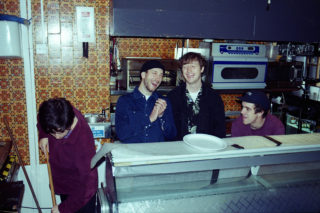 Let’s cross over to Cardiff, south Wales, where a guy called Davey Newington has been making music in a front room turned into a studio. Boy Azooga is his project (he plays live with pals Daf Davies, Dylan Morgan and Sam Barnes), and it started a short while ago.

News today though is that Boy Azooga have signed up with Heavenly Recordings (home to the likes of Baxter Dury, King Gizzard, Gwenno) and shared this new track and video for the excellent deep psych-funk jam ‘Face Behind Her Cigarette’.

The song was produced by Dr Ed Boogie (real name, Eddie El Shakarchie) laid down in his house.

Davey, the son of musical parents, picked up the drum sticks aged six and played in a bunch of Welsh Orchestras and jazz outfits as a teenager. A transformative moment arrived when his art teacher at school recommended he buy a copy of Can’s fourth album ‘Ege Bamyasi’. That opened a new world up, which eventually led him onto the music of the legendary William Onyeabor.

“This song is basically just a celebration (rip off) of the late great William Onyeabor,” he says, honestly. “I wanted the percussion to be purposefully a bit too loud, maybe by the usual standard. Loads of Onyeabor’s percussion is blaring in the mix, but it makes it sound so live and feely.”

Toby Cameron‘s made this trippy video for the song – his directorial debut.

Like it? Go see Boy Azooga live, they’re at the following places over the next few months: