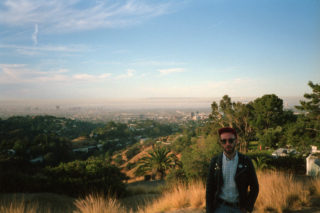 The former Veronica Falls drummer has put together his favourite songs by the legendary Scottish band, who saw it and responded with some kind words.

Earlier this month Teenage Fanclub released their 10th album, ‘Here’. For Patrick Doyle, former member of Veronica Falls and now recording as Boys Forever, they were a formative band for him growing up in Scotland. And while he’s not always at home, the sounds of TF are still both familiar and exciting to him.

Boys Forever has made a playlist of ten of his all-time favourite Teenage Fanclub tracks. You can listen to that below, but first, here are the words Patrick’s written about the band.

“It’s great to have an excuse to relisten to Teenage Fanclub’s back catalogue while I’m visiting friends in California, especially given how difficult it can be to find a piece of writing that doesn’t reference their West Coast sound. When I was growing up in northern Scotland, Teenage Fanclub were big on the soundtrack to my high school years, as well as being one of the first bands I saw live. A lack of pretension or ego meant they were a lot cooler than the other bands that I was used to seeing. I remember travelling to Aberdeen to see them touring their album ‘Words Of Wisdom’ and ‘Hope’ with Jad Fair on lead vocals.

Teenage Fanclub exude the spirit of Glasgow; a city with impeccable taste and born ability to not take itself too seriously. So as I look out of the window, over the hills of Los Angeles, blasting ‘Norman 3’ at full volume, I still can’t help but be taken right back to the Glasgow school, and I’m left wondering which West Coast it is they’re talking about, exactly.”

Norman Blake from Teenage Fanclub, has these kind things to say about Boy Forever’s mixtape.

“It’s really great to hear these kind words from Patrick. He’s such a lovely, sweet guy. I remember first meeting him when he was working in Monorail Music in Glasgow. Young, charming and super enthusiastic! I loved his old band Veronica Falls. They played with Teenage Fanclub a few times and I have all of the records that they made. Really excited for this new project, Boys Forever, and I wish him every success with it. Good luck Patrick!”

Here it is, listen to the playlist below – and see Patrick’s handwritten tracklist. 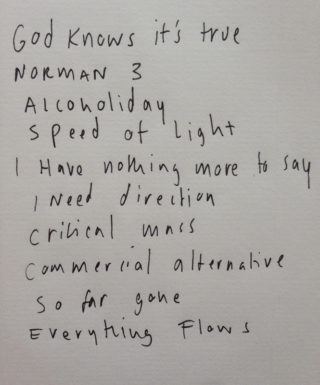 Boys Forever’s self-titled debut album is out now, and he’s currently on tour in the UK with The Goon Sax. The dates are:

Teenage Fanclub are touring too, check out the dates here.