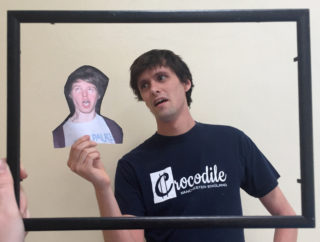 Stream 'Playtime' in full, from a punk duo embracing the daft ideas they would normally ignore

This photo of DIY duo Freak Genes says a lot about them and their debut album, ‘Playtime’.

Andrew Anderson is the guy on the left – Charlie Murphy is the one holding his head. It’s a necessary situation for the two of them – they don’t live in the same place and only meet up to either record or play a show. It’s also a pretty silly photo, and, having played in various punk bands in the North of England (The Hipshakes, Proto Idiot, Black Tambourines, Red Cords), silliness is something that the pair are embracing.

“Freak Genes is all the silly ideas that would normally be ignored,” they say, “the stuff that’s so simple it seems stupid.”

We’re not really sure where Murphy lives, but Anderson is in Manchester, which perhaps accounts for ‘Playtime’ sounding like and old Buzzcocks record.

It’s refreshingly daft, but also there’s more to it that the band will have you believe when they say it was made “using instruments we can’t always play, and recording equipment we don’t truly understand”.

Cult garage label Alien Snatch! seem to think so. They’re releasing the album later this month. But first, here it is in full.