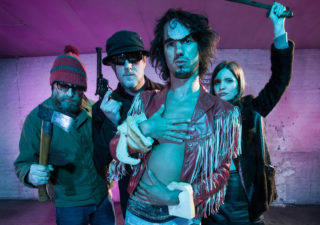 What is the bread stuff all about, though? And the axes, swords and guns...

We know The Moonlandingz can do provocative (scrawling “leave” across their face at a recent European festival showcase). We know they can do weird (mashing a loaf of bread up turning it into a set of on stage jewellery along with some ham and some hummus). Here’s a bit of a curveball though, they can also write a creeping, Velvet Underground-esque ’60’s noir-pop ballad. They’ve followed up their last single ‘Black Hanz’, with this new track ‘The Strangle Of Anna’. It features Slow Club’s Rebecca Taylor duetting with Johnny Rocket (aka Lias from Fat White Family).

They get extra points too, for their new band press photograph (above).

Their debut album is out on 24 March via Transgressive.