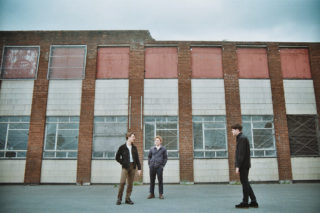 The baddies in old NES and SNES games were characters like Bowser. The video for Liverpool band Eyesore & The Jinx’s debut single may resemble those old console favourites like Super Mario Bros., but the characters chasing them down are much scarier. Y’know, people like Donald Trump and Theresa May.

‘Gated Community’ is the trio’s self-produced first track, recorded in a building that used to be a slaughterhouse. The garage-band say it’s a song that tackles the Western World’s fascination with borders in the Brexit-era.

Speaking about the single, they add:

“‘Gated Community’ is an ode to the factions of society that are determined to make the tiny island we dwell on that bit smaller. The enforcers of every arbitrary border.”

Check it out below:

Having previously play alongside the likes of DUDS and Downtown Boys Eyesore & The Jinx will be playing a bunch of festivals this summer including – Liverpool Sound City, Smithdown Road Festival, West Kirby Love and Liverpool Calling.