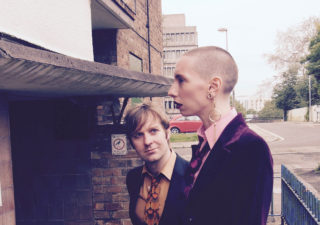 Almost a decade on since the departure of The Long Blondes – one of the more interesting and progressive bands from the mid 2000s indie-rock boom period that produced oceanic depths of garbage – the group’s primary songwriter, Dorian Cox, has just put out his debut solo 7″.

He’s been working away in various bands over the years, exploring bedsit electronica, cosmic disco and Young Marble Giants-inspired lullaby post-punk, but this is the first work under his own name.

The A-side, ‘Elvis’, is a clear nod to Suicide, the vocals becoming engulfed in a fog of echo, over the top of a primitive Casio beat. The B-side is ‘Priscilla’ by Sylvia, a collaboration between Cox and the punk poet, Elise Hadgraft. The chugging, still sleaze-ridden beat, drives away underneath a hazy cloud of atmospheres but Hadgraft’s vocals cut through the fuzz to recall a looping lyric that most will not have heard since the days of scuffed knees and school blazers.

There’s a refreshing primitiveness to both the tracks. The rough, lo-fi production leads to a blurry, wonky and almost crude sensibility, like stumbling down a gritty, darkly-lit, back alley as the sounds of a late night disco can be heard pounding distantly in the background.