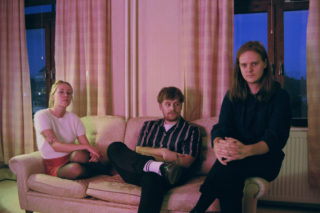 A hotel room, some blood and mysterious claws

Some days the world gets a bit much. That’s the impetus behind Echo Ladies’ recently shared track ‘Bedroom’. A song about “the need to be left alone”. “To isolate yourself and be in your ‘safety-zone’, which in this case is a/the/your bedroom,” they explain. “However, after too much time alone and in isolation maybe you start to go a bit insane.”

The Swedish shoegaze trio (Matilda Bogren, Joar Andersén and Mattis Andersson) have now made a video to go with it. There’s a bit of mystery going on. Featuring the three band members there are some nose bleeds, a car journey, an unexplained pair of monster claws… it’s directed by their friend Ebba Ågren from the band Wy.

“We just played the song for her and said we had a vision of a video in a hotel room,” they add. “A week later, she had a whole concept figured out and we found the hotel room in Vellinge, the same small town outside of Malmö where Mattis from the band grew up.”

Echo Ladies’ debut album, ‘Pink Noise’, will be coming out via Sonic Cathedral on 8 June.

This week they’re playing their first shows outside of their native Sweden, and they’re in the UK. Catch them at: