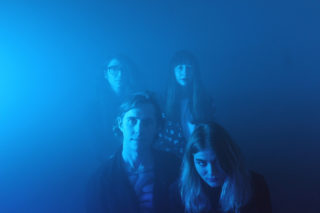 Few people would argue that getting a Facebook Message is better than getting a hand-written letter. That’s the old fashion luxury that Bristol/London-based label Art Is Hard keep alive with their monthly postcard singles club. It does what it says. Each month they mail you a new single, and at the end of the year they turn four of their 12 releases into playable postcard-shaped singles.

Next up, they’re releasing the debut single from brand new band Factory Seconds.

It’s still early days for this lot. There’s four of them, they’re from London and they take their name from the old factory where they rehearse.

Their first single is called ‘Caught In The Layers’ – and it’s a big, shoegaze-pop epic.

Bass player and vocalist Katie Wilkinson has this to say about it: “I was I recovering from a bit of a mental breakdown and was starting to feel well enough to channel my energy into writing music again and this was one of the first songs I wrote. I’ve only been in angry punk bands until now so this is by far the most ‘pop’ song I’ve written as well as being the most personal. It was almost like the mental breakdown was supposed to happen to soften me up a bit…perhaps.”

Factory Seconds have a few shows coming up, too: