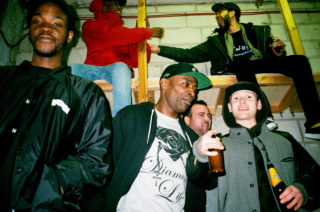 One of the highlights from their recent LVL 11 mixtape now has a great new video.

Back in the spring we featured Manchester collective Levelz on the cover of the magazine. We discovered that they weren’t so much as a band, but more of a cultural meeting point – a 14-strong group of MCs, DJs and musicians gathering together and writing prolifically in an old cotton mill in North West Manchester.

Since then, after a bunch of chaotic summer festival spots, they’ve kept a steady stream of new stuff coming, including recent track ‘Drug Dealer’ which now has an excellent new video.

The track itself is taken from the ‘LVL 11 mixtape’.

The group haven’t been messing about. They only put out the video for ‘Slow Down’, another track from the mixtape, a couple of weeks ago.