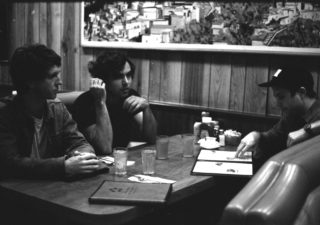 The garage-punk trio are touring the UK later this month

There’s Will Ivy on vocals and guitar (Dream Boys, Wet Illustrated and Will Ivy Band), Tim Hellman on bass (currently in Oh Sees, and in the past Sic Alps and Ty Segall‘s band) and Justin Sullivan on drums (he was in The Babies, and also played with Kevin Morby once he’d started doing solo stuff outside that band).

Their self-titled debut album is out later this month, on 13 October, via Castle Face.

In the meantime, they’ve just shared this new video for their track ‘Pearl’. The stop-motion clip features them doing some mundane things like making the bed, making a banana milkshake and wearing a dog mask, all done with a sprinkling of surreal humour.

They’re about to play a few shows with Ty Segall and the Freedom Band in the States. In a couple of weeks they’re in the UK, playing a sold out headline show at London’s The Shacklewell Arms along with the following dates: