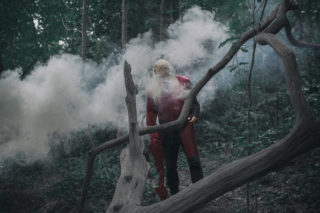 Högni’s debut solo album is inspired by two engineering giants from the past – two locomotives, Minør and Pionér, which assisted in the construction of Reykjavík harbour way back in the early 20th century. The two trains, the only ones ever to have been used in Iceland, have remained dormant ever since, relics to a bygone era.

For Icelandic songwriter Högni, member of Hjaltalín and GusGus, the trains came to symbolise his own journey to self-acceptance through a particularly difficult period in his own life. He’s challened that into his debut solo album, ‘Two Trains’, out on 20 October via Erased Tapes.

Before that arrives, though, he’s shared this new track from that LP: ‘Moon Pitcher’.

It’s one of the slinkier tracks from the album, showcasing an almost Prince-like falsetto from Högni.

In his own words:

“‘Moon Pitcher’ is about a character who has drenched himself in the hunger for impression. He enters a state where the conditions of love are dependant on sensitivity and courage to let all that’s inside, out. Ultimately a proposal for marriage and a proclamation of love, HE is rectified when the “moon pulls oceans from the sky, there’s something wrong with me and let me tell you why – I’m in love, I’m in love, can’t you tell?”