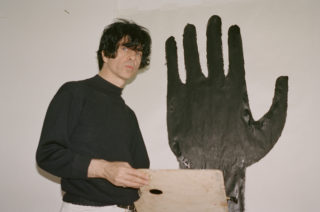 But before that arrives, try new song 'Nothing Personal'

Ian Svenonius has spent enough time in music – more specifically punk rock ‘n’ roll – to know what it is. Know how it works. Know that if you don’t have some fun with it and its familiar tropes you’ll quickly go insane. After “a lifetime in the trenches” playing with the likes of Nation of Ulysses, The Make-Up, Weird War, XYZ and Chain and The Gang (there’s more) and writing a number of books (try Supernatural Strategies for Making a Rock ‘n’ Roll Group for starters) last year he went solo under the name Escape-ism. He announced the project with the instructively titled debut ‘Introduction to Escape-ism’.

Now, it’s time for Stage Two. On 7 September Escape-ism will release their second album ‘The Lost Record’ on Merge. The engaging myth of the ‘lost record’ continues to gain traction – those albums often initially overlooked or never released gathering dust in someone’s tool shed to one day be discovered and gloriously celebrated as an excavated classic. Escape-ism say they’ve done that but just cut out all the faff in the middle – all the decades, and the waiting. Basically just cut to the chase with a classic.

“The process a record has to go through to be “lost” – and then found again – is arduous. It’s also quite risky, since most lost records are really just lost: tossed aside and forgotten forever.

So, when Escape-ism – the most exciting group in the world – announced its new and highly anticipated release ‘The Lost Record’, it created a commotion. For some, it seemed unfair for Escape-ism to jump ahead of the usual protocol and not go through the degradation that a historic “lost record” suffers: the endless time spent in a bin in the basement or a remote warehouse. Unshipped, unloved, unappreciated.

But for Escape-ism, it seemed easier to circumvent the rigmarole and just get on with it.”

‘The Lost Record’ is being previewed by this new song ‘Nothing Personal’. Ian explains:

“It’s a super-8 movie filmed by Alexandra Cabral and featuring Zumi and Ariana Papademetropoulos. The song and video explores the moral system underpinning capitalism, and visually contextualizes it as another aberrant and sinister cult ideology.”

Escape-ism have also announced a UK tour, they’ll be calling at: