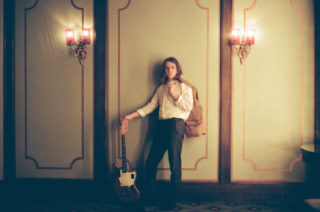 Kevin Morby was first known for his involvement in back-porch folk band Woods, and then his group with Vivian Girls’ Cassie Ramone, The Babies (an excellent group).

Both acts schooled him well for a solo career that hit a high last year with Morby’s third album, ‘Singing Saw’ – a record that followed stylistic suit in as much as its classic American songwriter feel: a distinctively country-led record that tied in with his move from NYC to LA, and ‘Singing Saw”s theme of solitude in the wilderness.

The guy shouldn’t really be releasing a new album so soon, but ‘City Music’ (out June 16th via Dead Oceans), is ‘Singing Saw”s companion piece – a record about urban life in the States and loneliness in crowded spaces.

This first track, ‘Come To Me Now’, gives you a taste of Morby’s new, less-earthy direction. Turns out that voice of his voice belongs in an apartment just as much as it does by a campfire.

‘Singing Saw’, says Morby, was imagined as “an old bookshelf with a young Bob and Joni staring back at me, blank and timeless. They live here, in this left side of my brain, smoking cigarettes and playing acoustic guitars while lying on an unmade bed.”

For ‘City Music’: “Lou Reed and Patti Smith stare out at the listener,” explains Morby. “Stretched out on a living room floor they are somewhere in mid-70s Manhattan, also smoking cigarettes.”