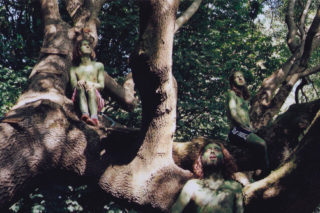 The sludge-rock three-piece flee into the misty woods and end up praying for mercy in a church.

We begin this post with a message from Yemrot Cire.

“Joseph Philip Hunt, James Brian Marshall Tormey and Eric Niall Tormey – members of the pop band Gang – have been found dead inside a rural, disused church near the village of Kingsdown in Kent. Cause of death has yet to be determined. There were no signs of physical trauma on the corpses, nor any chemical imbalance in their systems denoting a poisoning of any kind. Upon discovery it was noted that all hair had been removed from their bodies. The members of the band seem to have died without cause or explanation.

The story became even more bizarre when it was revealed that, carved into the door of the village church was this message: ‘Gang are dead, left lifeless in this temple of lies. They are not us, nor are we they. We are nameless, but you will call us Doppelgang; sent here to occupy their existence, hijack their legacy, and reveal the true nature of things. Humanity pales in comparison to our kind. Nothing is safe…'”

You’re probably thinking ‘what the hell is going on?’

Appropriately, Brighton band Gang have chosen Halloween to share the disturbing video for their new track ‘Dead’. It features the three-piece cruising around in a people carrier before the engine blows on a country road, spooked by something they follow their dog into the woods. And, well, a few minutes later they find themselves praying for mercy in a church… watch the video to see how it all unfolds.

Yemrot Cire, by the way, is lead singer Eric’s name spelt backwards – the doppelganger who replaces him in the vid.

‘Dead’ comes out on Ra-Ra Rok Records on November 25. Considering they’ve been bumped off, somewhat miraculously Gang have a bunch of shows coming up: