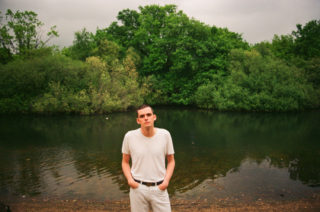 Yeah, this again. Brexit. But Jack Cooper (of London bands Ultimate Painting and Mazes) is one of the few people in our immediate world who’s standing up for balance and reason on the matter, with the first song to come from his solo debut album, ‘Sandgrown’, out August 25th via Trouble In Mind.

Here’s what Cooper says of ‘North of Anywhere’, a mellow country-ish song that starts with the line “This isn’t a protest song” –

“I think one good thing about the EU referendum that happened last year is that everyone seems more engaged with politics in the aftermath. I’m quite open with my opinions and I enjoy discussing things, but my opinions change from week to week and like most people my world view changes when I’m presented with a compelling argument. There’s a huge pressure on people and especially young people to think a certain way, especially online. If you don’t subscribe 100% to a particular ideology, then you’re out the club. I think it can be incredibly intimidating nowadays to voice an opinion… If you’re young, maybe people will say “you don’t know what you’re talking about” or if you’re Northern and you voted to leave the EU, you’re immediately a racist.”

It’s beautiful tune, too, with the Blackpool-born singer sinking into a smoother, deeper tone than we’re used to. “Recording on my own liberated me to sing more like I actually sing,” he says.

‘Sandgrown’ – the name a reference to his formative years working as deckchair attendant on Blackpool beach – is the record he’s been trying to write since he was 18 years old. Moving to Manchester and then London to play in garage bands put a pin it that until now.