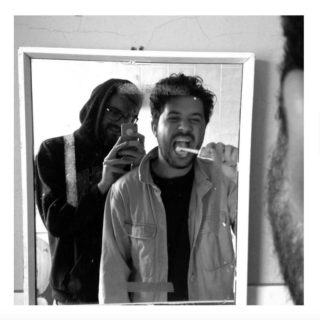 Keep it simple. That’s no doubt what the members of Crystal Palace duo JOHN, both called John, said to each other when coming up with a title for their project a couple of years back.

Anyway, for two people they make an impressive din, and have played with the likes of IDLES and USA Nails in the past. Their 2015 EP ‘Validation’ is well worth a listen.

Now, they’ve got a new album, ‘God Speed In The National Limit’, coming out in October. ‘Ghost Printer’ is the first track from it.

“The track presents the story of a man haunted by his own technology offering a darkly comic view of the common routines we find ourselves coerced into,” they comment.

For the video, presumably one of the Johns, performs the track from three behind three dark peep holes. It’s warped, and brilliant.

JOHN will also play an album launch show at London’s Old Blue Last on 18 October. ‘Ghost Printer’ is out today (23 June) via Till Deaf Do Us Party.