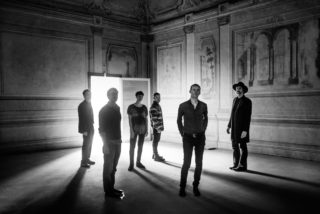 Lots of artists dub themselves as “outsiders”, but you feel that Italian psych-band Julie’s Haircut, now well into their third decade, can genuinely lay claim to the title, if indeed you know them at all. There simply weren’t that many Italian bands breaking through that were influenced by the likes of My Bloody Valentine and Spaceman 3 back when they formed in mid-’90s. So when Luca Giovanardi from the band says: “We have always been outsiders,” you kinda get it.

Here’s the record’s lead track, ‘Gathering Light’, from the pleasingly mellow end of the psych rock spectrum, where the lyrics are whispered into your ear and the organ and bass surf into the sun together, rather than compete to batter your head in the hardest.

Close your eyes for the next five minutes and just forget about everything.