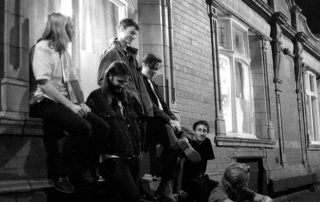 Would listen to their new song, wouldn't let them babysit

Remember when Fat White Family first turned up? The shows were a spectacle, but there was an overriding sense of unease. A sense of the wrong, the unpleasant, of their being attracted to darkness. That’s continued even if these days they’ve moved onto bigger stages.

Newcomers The Starlight Magic Hour, the Manchester/London outfit, have a similar feel. Over the past 12 months they’ve been regularly playing shows in those major cities. London-based bookers Permanent Creeps – who’ve put on shows by the likes of Vulgarians, Hotel Lux and, the aforementioned mentioned Fat Whites – are putting out their their new material. And they’ve detected a similar grim magnetism in it.

Their first release via the label is ‘Song To Bethy’, the lead single from a new EP coming out in September. They play a show at the Brixton Windmill on 14 September to mark that occasion.

The track, a Pogues-y macabre country-rock number where the main riff is one of them whistling, is officially released on digital platforms on 23 August. In the meantime, check it out below.

Photo by: Through The Eyes Of Ruby