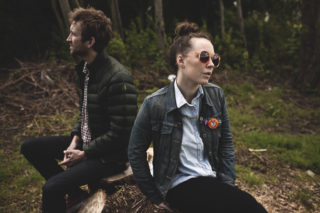 There’s a lot of smartly produced electronic pop music out there, but Sylvan Esso‘s take on that over the past couple of years has just felt a bit more imaginative than the majority of it.

‘Kick Jump Twist’ – following ‘Radio’ put out a short while ago – is their new track, featuring 8-bit bleeps, Amelia’s Róisín Murphy-esque vocal and some hypnotic layering of melodies. The final minute in particular will sound incredible in a club with a massive sound-system.

In 2014, Made of Oak’s Nick Sanborn and Mountain Man’s Amelia Meath got together and made one of the most underrated, unashamedly accessible, cliché-free pop records of that year, and there will be more new stuff in 2017.