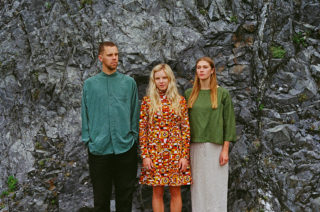 No offence to London Grammar or The xx, but they make the kind of albums your mate who works at the insurance brokers pops on at a dinner party. You know, the kind of music that’s noticeable, but not too noticeable. Goes well with a humus dip selection, that kind of thing.

Mermaidens are a three-piece band from Wellington, New Zealand. They don’t make that sort of music, and they want it to be known.

Early next month, after an EP in 2014 and a locally released debut album last year, they’ll put out their first international album via the legendary Flying Nun label.

To introduce it, they’ve just shared this new track, ‘Sunstone’.

The wonderfully named Gussie Larkin from the band – who sings along with Lily West, with Abe Hollingsworth on percussion – has this to say about the song:

“‘Sunstone’ is made up of three contrasting sections, gradually becoming more and more brutal as the song progresses. I didn’t want the song to have a ‘hook’ that it returns to – instead I wanted to create an unpredictable journey: full of time signature changes, evolving guitar textures and imposing vocals. It’s a not a song you can just put on in the background!

The lyrics explore a few different zones of my mind – from the desire to reassure an anxious friend to the dynamics and complexities of a relationship. For the ‘chorus’ I settled on the words “100 floating beings come down!” simply because I needed something fun to yell – and I also love the imagery of that. “Floating Beings” is also a nod to our first album cover, which is an illustration of a vibrating floating body. Sunstone finishes up with a mantra-like chant that is still an earworm for me: “Wish I could loosen/Wish I could lose/Wish I could loosen under my skin.”

It’s good exercise for the brain.

Mermaidens’ new album ‘Perfect Body’ is out on 4 August.