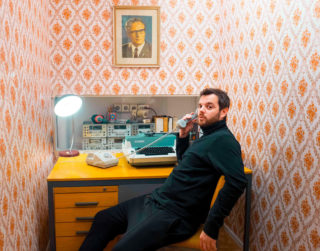 Six years on from The Streets, Skinner goes it alone again

Those who haven’t kept up might think that since he called time on The Streets in 2011 Mike Skinner’s wound things down on the music front.

Quite the opposite. Late last year, Skinner was a guest on our podcast series Midnight Chats. He talked about his many projects, including his regular Tonga club nights he does with Merkage Dave, which ping around Europe and occasionally send Skinner to Los Angeles. He also DJs under his own name, has a new(ish) label called Mike Skinner Ltd., and was the guy responsible for scoring The Inbetweeners Movie.

Since winding up with the fifth and final Streets LP in 2011 he’s made music with Tonga Balloon Gang, too, and The D.O.T (with Rob Harvey from The Music), but his latest project is just Skinner. Working under the title of The Darker the Shadow, The Brighter the Light, he put out a couple of tracks on Soundcloud in 2016, but just now has shared this new one called ‘Bad Decisions In The Night’, for the first time on Spotify.

The instrumentation’s got a Massive Attack ‘Teardrop’ feel to it, while the mood is suitably understated for a man who doesn’t feel he needs to make a song and dance about himself these days.