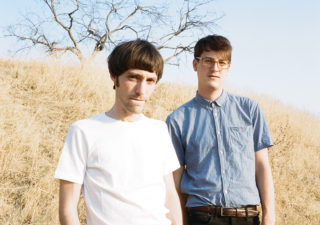 Lucas Fitzsimons may have been born in Buenos Aires and brought up (for a period) in the hip-hop-filled streets of Compton, but the sounds closest to his heart are those of ’60s folk and psychedelia.

The ghosts of Lou Reed and Syd Barrett don’t so much as linger but crawl all over the sound his band The Molochs.

Following the release of their second album, ‘America’s Velvet Glory’, earlier this year, they’re following it up with a new EP, ‘AVG Sessions’, out via Innovative Leisure on 3 March. Now, they’re sharing a new track with it, you can listen to ‘Come Softly With Your Hidden Spoon’ below.

Lucas Fitzsimons from the band has this to say about it:

“…Hidden Spoon’ is about revolutionaries imprisoning and executing their King in Paris in 1793. It’s just a good story and can apply to any period of time. The song is a vivid ballad… something that can bring the story to life in someone’s head.”

They’re playing SXSW in March because that’s an important thing to do. They’re in the UK and Europe this spring, too, playing the following shows: