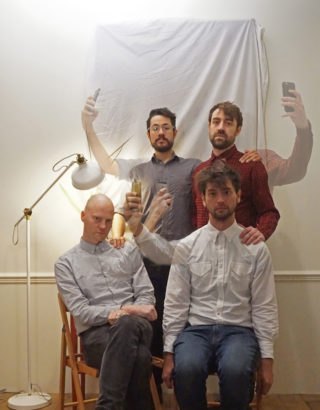 This is new track 'Smile', a taster of their new album 'Life Cinema'

Call it British punk, call it whatever you want, but it’s having something of a moment due to the breakthrough success of the likes of IDLES in recent times.

However, you’d hope it’d see other bands who’ve been doing something not a million miles away from that, will also see a bit of that spotlight. USA Nails – featuring previous members of the likes of Kong, Future of the Left and Dead Arms – are ferocious, and they’ve been doing their thing for a while now. In fact, they’re now on the verge of releasing album number four. This one, ‘LifeCinema’, arrives via the Dipped In Gold label on 10 May. It was recorded at Bear Bites Horse (a real place) in east London and produced by Wayne Adams.

Tee-ing the whole thing up is a blistering new single, ‘Smile’. You can hear that and watch the video below. It features the members of USA Nails walking into a room and sitting down as if they’re having their passport photo taken which is always a bit awkward. Dig in.