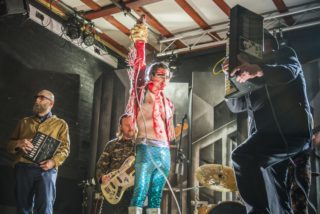 About a month ago, we met up with Johnny Rocket and Dean Honer from semi-fictional unit The Moonlandingz. We gave a pair of them £25 to spend on records. Johnny bought some vinyl, then got on a plane to Cambodia.

We get the sense that the band, formed out of members of Fat White Family, Eccentronic Research Council and Slowclub have been, for the past year or so, a fun, rebellious, raucous night-time experiment for its occupants. However, there was news recently that they’ve signed to Transgressive Records, and that there’s a proper new album in the pipeline, so maybe it’s all about to get a bit more serious.

The first sign of that is the announcement of a new EP – out now – called ‘Black Hanz’. Take a listen to the first track from it below. It was recorded at Sean Lennon’s home, who is of course has a very very very famous friend, called Mark Ronson.