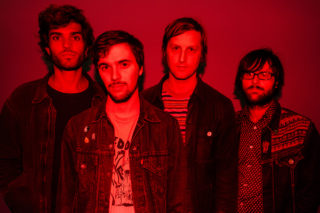 A spot of delicious Rory Atwell produced noise from London for you.

For all the rap that ATP eventually got it was great while it lasted, and didn’t just provide some great nights but also brought some likeminded people together.

For example London band Spoilers. They met at the Deerhunter curated festival after the four members discovered mutual common ground with bands like Thee Oh Sees and Sonic Youth.

A couple of years down the line, they’re here and they’ve got their debut LP ready for release.

Titled ‘Anti Vibe’ it’s produced by Rory Atwell was recorded partly at home and partly at the studio boat Lightship 95.

Here they are explaining a bit more about it:

“This album is about a driving optimism, despite how dark it can sound in certain places, and riding the balance between that vibe and the anti-vibe. Lyrically it’s about honesty, being in love, anxiety and self-belief. For Spoilers to work at its best when we write, practice and play live, it has to be a release for us and the every day.

‘Anti Vibe’ is a record we’re really proud of and have been intimately involved with through the whole process. Having worked on writing and recording the LP with Rory Attwell at the controls at Lightship 95, to designing, hand numbering & folding the obi strips in the record sleeves to filming and editing our music video, stocking record shops, posting out the LPs, building our website, etc. so we’re pretty excited to get this thing out there. And relieved. Hope you dig.”

It’s out tomorrow (11 November), but for the moment, you can stream it exclusively below. Oh, and if you like it, they’re playing a launch show tonight at London’s Brewhouse.