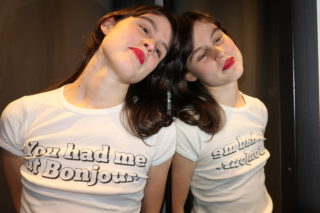 It may have been written in her car, because sometimes she does that

ShitKid is Åsa Söderqvist, and it’s fair to call her prolific given that she’s put out four collections of music in two years. The Swedish DIY artist sometimes writes and records music in her bedroom and rehearsal space. Other times, it’s in her car.

Anyway, after the release of her debut LP ‘Fish’ last summer, there’s already a new EP ready to go. ‘This Is It’ – nothing, we think, to do with Michael Jackson – will be coming out digitally and on limited edition vinyl via PNKSLM Recordings on 19 January.

Ahead of that, she’s shared this new song ‘Yoouuu’. It might be a two minutes in length, but it feels like the story of a long goodbye.