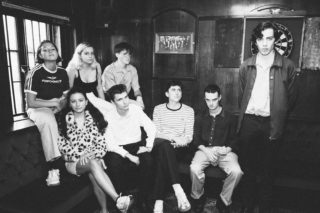 At present there’s not a great deal known about the Cambridge group Nervous Conditions. What we do know is that they are new, very young and that there are eight of them who have now released a blistering live recording of a debut track called ‘Village Mentality’.

A demo version of the same song was doing the rounds last year, briefly cropping up on the Quietus Radio Hour and BBC Radio 6Music, but has since disappeared leaving nothing but a blank Soundcloud page.

Over the song’s near 9-minute mark it takes in James Chance-like blasts of atonal saxophone, droning viola, a bass line that is as seductive as it is funky as it is ominous, dry and scorched vocals with the odd Mark E Smith intonation and eruptions of guitars and drums that collide and combust to form a riotous and potent blast of chaotic yet coherent post-punk noise.

Nervous Conditions play The 100 Club, London supporting The Moonlandingz on December 6, and the End Of The Road Xmas Party at Kamio the same night.