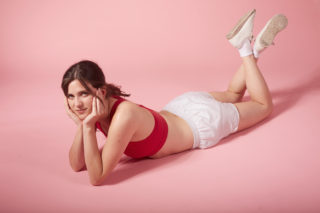 Pillow Person has been a new name to many this past six months. Even her real name Sarah Jones is a new one for some. But you’ll sure have listened her her work in the past as drummer with everyone from the likes of Prey, New Young Pony Club, Bat For Lashes and Hot Chip. She’s in-demand.

A couple of months ago she explained the reasons for creating her new solo identity Pillow Person in our feature.

‘On Your Way’ is only the second single she’s put out. It follows ‘Go Ahead’ and its b-side ‘In My Game’.

From the short explanation that accompanies it, it sounds like the song is a rumination on the pros and cons of facial recognition technology as it continues to become more integrated in society.

It’ll be coming out on Moshi Moshi on 27 January.