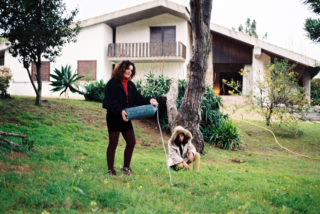 The Portuguese band will release their third album in June 2017

Back sometime around 2009 no-one was really releasing the music of garage-rock bands coming out of Lisbon and the surrounding areas. Portuguese sisters Júlia Reis and Maria Reis decided to do something about it by starting their own label Cafetra Records.

Alongside that, the pair (a couple of years in age apart, but who share the same birthday) have also been making a steady stream of great records as part of their own garage-rock duo Pega Monstro.

They’ve just shared a new track along with the news. It’s called ‘Partir a Loiça’ which by all accounts translates as “break all the dishes”. A popular Portuguese exclamation.

Guitarist and keyboard player Maria explains: “It’s a Portuguese expression meaning to shake things up, to take a fiery U-turn on a path that has been misconceived by those in power for instance. On this song this meaning is explicit and on the record articulated in other ways – voice melodies and its references, song composition and the nakedness of the productions approach – an overall attempt to punk shit up and still sing what beauty means to us.”

The track is three and a half minutes of feverish, snappy, cartwheeling garage-rock.

The album is available to pre-order now