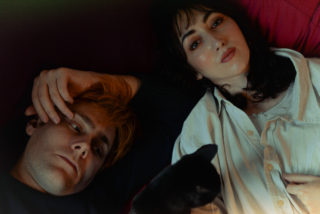 It’s taken Pregoblin a little bit of time to get to a place where they’re happy with sharing the produce of their labour. A couple of years in fact. They are south London duo Alex Sebley and Jessica Winter, and for those with a keen eye on what’s going on in that neck of the woods, those names might be familiar.

Sebley was a previous member of The Saoudis (with Lias and Nathan Saoudi) before joining Fat White Family. In fact he co-wrote ‘Touch the Leather’. Winter has worked with FWF too, as well as the likes of Gorillaz. Most recently they played with Fat Whites at their intimate pair of shows at The Lexington.

Anyway, ‘Combustion’ is the first song they’re properly gifting the world. Co-produced by Dan Foat and Nathan Boddy, it’s groovy as hell. Closer to ABBA than anything FWF have ever done. Upbeat then, except for the fact it seems to be about exploding into flames. Oh, and that red herring of a band name? It’s inspired by the name of the drug Pregabalin – usually used to treat anxiety or epilepsy – that Sebley used to kick heroin.

Listen to ‘Combustion’ below, coming out via Fnord Communications. The 7″ vinyl is out on 7 March.