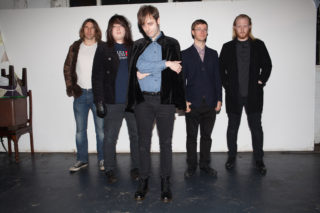 Watch 'Wet Man' from the band's forthcoming 'We're Not From Here'

MYSTERON front man Jack Clayton is a 65 year old man trapped in the body of someone forty years his junior. He’s an alien; embittered, angered and confused by the world he finds himself in and so instead carves out an alternative and psychedelic sonic reality to exist in.

It therefore makes perfect sense then that his Sheffield group’s latest EP is called ‘We’re Not From Here’.

The four-track release is a little like tuning into an old esoteric TV film in the middle of the night, rooted in whirling and jumping keyboards that float from Broadcast-like eerie wonder to ’60s garage psych oomph, whilst Clayton’s vocals nod heavily to the grandiose flair of Scott Walker with the kitchen sink bite of Jarvis Cocker.

Combined, it makes for a pleasingly perturbing yet beguiling concoction that, in their own words, operates in a realm of “existential space realism”.

The video for EP track ‘Wet Man’ captures this sense of alienation and bewilderment as it pokes fun at the perceived sterile nature of TV-ready Jools Holland bands, whilst also managing to look like a Joe Meek-starring short film directed by Lindsay Anderson.

There’s also a song on the EP called ‘Spud King’ about a man with a face of a potato.

MYSTERON’s E.P ‘We’re Not From Here’ is out April 22nd and they play a launch show the same evening at the Shakespeare in Sheffield.