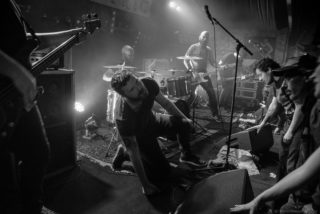 Listen to 'Dick E Mozart', the new track from the Bristol punk band inspired by the time when loads of snakes ate people

The St. Pierre Snake Invasion sound about as petrifying as the event that inspired their name. It remains one of the worst volcano disasters ever recorded, when, in 1902, Mount Pelée on the island of St. Pierre, Martinique, erupted. Before the deadly explosion killed 30,000 people on the West Indian island, it drove wildlife into the local towns, including an army of giant man-eating snakes.

Bristol’s The St. Pierre Snake Invasion have been making thunderous noise for a couple of years now, and released their debut album ‘A Hundred Years A Day’ in 2015.

As they work on the follow up to that – they’re hoping to have it out this Autumn – they’ve recorded a pair of new tracks for the Too Pure Singles Club, to be released next month.

You can hear the first of the double A-side below. It’s called ‘Dick E Mozart’.

The track will be released, along with flip-side ‘Appendages’, on 26 May. The Too Pure site has all the information you need.