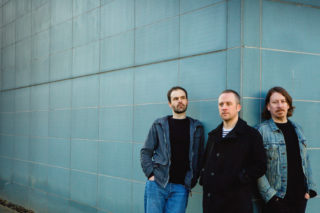 Almost 10 years since their last LP, the Manchester trio return with new music

The last time Manchester trio The Longcut released an album, ‘Open Hearts’, it was 2009. Labour were still in government, Keisha left Sugababes and the years’s top selling album was Susan Boyle’s ‘I Dreamed A Dream’.

So there’s something brilliantly and admirably pedantic about the fact the Manchester trio haven’t made a new LP since then, not really for any other reason than wanting to ‘get it right’ for their own satisfaction.

There was a sign of it coming, when they stirred from their slumber late in 2017 to play a festival in Greece and a show in London. Now, they’re actually preparing to release that new LP. ‘Arrows’ will be come out via Deltasonic on 6 April 2018.

“We were going to call it ‘Monuments’ because of this process of chipping away and adding things,” says bassist Jon Fearon of what eventually became the track title of the record’s final song.

“Much of the album was born out of frustration with the whole process,” adds drummer and vocalist Stuart Ogilvie. “Like even when you know good things are happening in your life, other situations can get you down. That balance or imbalance is felt by everyone so hopefully people can hear this journey and relate.”

Ahead of that, The Longcut have just shared this new track ‘Deathmask’ – a six-minute slab of thumping, hypnotic electronic rock music.

If you’re memory needs a freshner, here’s The Longcut’s video for their 2004 track ‘Transition’.