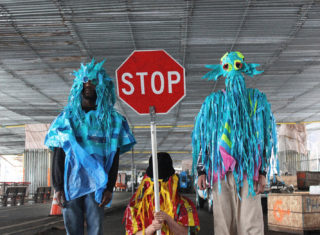 Fans of BADBADNOTGOOD and Kamasi Washington will eat this up.

The Onyx Collective have truly earned the label ‘collective’. Its core members are a tight-knit group – leader Isaiah Barr on alto and tenor saxophone, Austin Williamson on drums, Walter Stinson on upright bass and Spencer Murphy on electric bass. But the cast of New York titans they’ve worked with expands much further. Their live band has featured acts ranging from Nick Hakim to Princess Nokia, Dev Hynes, to Wiki, while its members have humbly contributed to the latest work from David Byrne and Ibeyi (Isaiah played in their live band).

If it wasn’t already obvious, their music bleeds with NYC spirit – all the sweat, dirt and grime that goes with it. On ‘Lower East Suite Part Three’, their debut album, released this June, they’ve paired their sound down to the rawest elements, recording in a DIY setting to capture the messy reality of their city.

Early single ‘FDR Drive’ is as punk as jazz music gets. The drums bubble with a restless, caustic energy, while the ominous bassline acts as a gritty underbelly for Barr to soar over. His sax playing is evocative and powerful. The track could wind on for another five minutes without breaking the spell. Give a listen below:

The Onyx Collective will support Kamasi Washington this month on the UK leg of his tour.