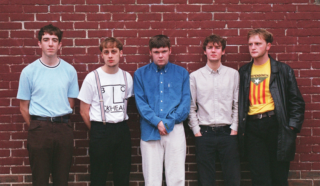 Albert Pierrepoint had a grim job. Often (inaccurately) referred to as Britain’s Last Hangman, he was the executioner from Merseyside who throughout his career working for the prison service was responsible for seeing off more than 400 people – including William Joyce. He retired in 1956, and subsequently ran a pub in Lancashire and wrote his memoirs.

Hotel Lux’s new track is a poem about Albert Pierrepoint. They recently told So Young magazine that the track is about Albert’s “dubious morality” and “eventual guilt-ridden demise”.

The south-London five-piece are no strangers to the macabre. Back in January, Hotel Lux shared ‘Envoi’ – a claustrophobic track accompanied by a video amassed of grainy footage from the ’80s of riot police, political unrest and urban poverty. It was austere, but also felt hauntingly relevant.

The intervening months have seen the band – who originally relocated from Portsmouth to London – play a host of shows, supporting the likes of Shame, Yak, HMLTD, YOWL and Goat Girl.

Now, they’re about to release their debut their debut 7″ on Too Old For This records on 17 November 2017. On the same day, Hotel Lux will play their first headline show at The George Tavern, Stepney Green, London.

Check out ‘The Last Hangman’ below – produced by the band at Eastcote Studios, west London, it’s excellent song but undeniably bleak – just like Albert Pierrepoint’s 9-to-5.

In the next month or so Hotel Lux will be playing the following shows: