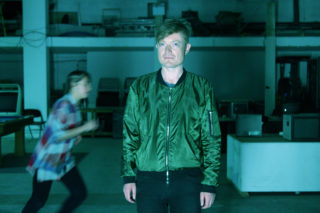 The clip is inspired by 700-year-old Japanese theatre

Before 2017 escapes you, if you’re looking for a discovery which may have slipped under the radar from the past 12 months check out BAMBOO’s second album ‘The Dragon Flies Away’ released in May via Upset The Rhythm.

One of the best tracks from the release ‘Always Running’ now has a video. Visually it’s inspired by Noh theatre, a form of classical Japanese musical drama pioneered in the 14th century and still performed today.

Here, Rachel also explains a bit more about the song’s message, too:

“It was written about a friend who is always putting obstacles in front of themselves and who finds comfort in never succeeding at anything, because maybe to them that is somehow a safer or more comfortable option. So It’s trying to encourage that person to shed off those self-imposed barriers, and I suppose we all often go through times where we are our own worst enemy and hold ourselves back, which is also a theme within the album too. Trying to overcome our own fears etc…”