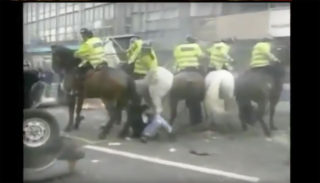 It’s been a grim old week, hey? Made worse by the fact that a tangerine bigot is about to become president of the United States of America.

Hotel Lux are helping us do some wallowing. Earlier this month the south London five-piece shared a new track ‘Envoi’, recorded in lead singer Lewis’ shed. They’ve now got a video, made by Josh Whettingsteel, to go with it.

‘Envoi’ is part of RIP Records’ new series where they’re putting out a new release every month in 2017. At the end of the year those tracks will form a 12″ compilation.

Hotel Lux are playing Brixton Windmill on 23 January along with Shame and Fish. If you don’t catch them then, they’re at The Finsbury on the 27th.