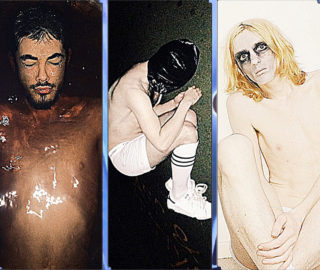 Imagine Wichita‘s inbox. It’s probably creaking under the amount of music they get sent on a daily basis from artists looking for support.

In fact, they’ve only ever signed one artist before after receiving an unsolicited email.

That’s until this message dropped into their Outlook recently from Scent: 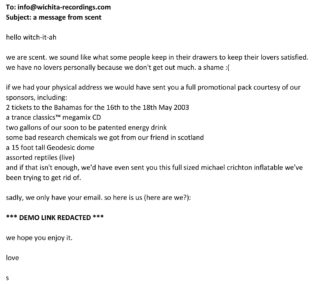 That note (obviously along with the music), convinced Wichita to make them the label’s latest signing.

About Scent then… well, for the moment they’re keeping things vague, describing themselves as follows:

– Three mammals in a basement lounge taking turns to look hungrily at white-socked feet through a lopsided crack in the ceiling.

– A neutral/nocturnal pop group happiest when fed and cleaned by forces from above, half-lit by the sounds of a vacuum choir in the ether.

– Hot, sick and fragile, they do what they can with their nubile instruments, though sometimes it doesn’t produce the results they want.

There you have it. Listen to ‘Kim’ EP below (and read their comments about it). It’ll be released along with a sleeve designed by the band on 17 November.

Scent provided the following about their new release:

“He hung skinny in the basement for a week or two. Didn’t go outside. Blindsided by vacuous jump cuts, i guess. I dunno, i didn’t ask him. He had a nice face and slow hair. You know, the kind that gradually primps itself upon exiting the folds of a dirty pillow. Great body too. Huh. Played guitar a bit, probably better at bass. Not a bad drummer. Wore old t shirts and a selection of European tracksuit bottoms. Yeah, yeah. Don’t shoot. There were two other kids too, I mean, they could have been older. Some chick, no, uh, guy. Sung a lot. Probably sung more than spoke. Recorded thousands of hours of this stuff in a loft. Something about “the great leveller”. Pretty spurious. That other guy, though? Nice and tan. Power in his wrists. Good record collection, if that matters. Sugar-moulded face before he hit the showers with the rest of them.”