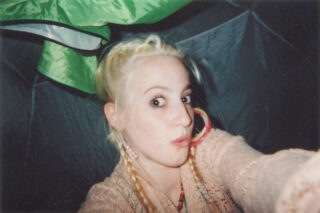 In 2006, Beth Jeans Houghton was in Newcastle obsessively watching Almost Famous, of course

From issue 147 of Loud And Quiet, an extended version of our Sweet 16 feature with Du Blonde is below.

Listen to its 12-minute podcast version via your private L&Q membership RSS feed. To access it and listen to previous Sweet 16 episodes, hit the ‘subscribe to podcast’ button here. info@loudandquiet.com if you get stuck.

When I was 16 it was 2006 and I was in Newcastle really wishing that I wasn’t. I was thinking, ‘I am going to go to LA and I am going to go on a road trip’, but that was me in my local park getting stoned and hanging out with these 30 year olds who were in a psych band. Now I look back, I think that’s pretty fucked up.

I left school when I was 14 because I hated it, I have ADD and dyslexia and my brain doesn’t retain information the way others can. I also have synaesthesia and if I see any letters, numbers or words I just see colours but I have it so intensely that it makes it difficult to read. This is really over-whelming so I came up with an alphabet which was a different symbol for each letter and I would use that in school to take notes – none of the teachers believed I could read this alphabet though.

It wasn’t until my early 20’s that I knew what anxiety was. I knew I was different when I was 16 but I didn’t know where that was coming from. Medical diagnosis is so helpful for me and even with the Tourette’s now, which I have recently picked up, being diagnosed means you can help yourself. I can Google anxiety or Tourette’s and there is all of this literature available. I was always an over-thinker when I was a kid, I probably still am!

I got a job in a hairdressers and a tattoo shop and soon after that I got my first guitar. It was a Fender Stratocaster and it was Daphne blue, which is kind of an egg-shell blue. I thought it looked like a Cadillac and I remember thinking this is my future. I couldn’t play but my mum’s friend George taught me ‘Pinball Wizard’ and that was the beginning for me.

The hairdressers, I got a job there because I had a crush on my boss’ son and I thought, ‘oh, maybe if I work here he will fall in love with me’, but he didn’t. This is super fucked up but they had a tanning booth and my boss told me to try it. They used to call me Bambi as I was so pale and she gave me this cream for protection but it was really a tanning cream ­– it was a practical joke that was completely impractical and I got so burned that that night I woke up in the middle of the night with skin stuck to the mattress.

The tattoo shop was where I used to hang out all the time. My friend Dan owned it and he said come and do reception. I was so bad at it because I was cripplingly shy so when he wasn’t around I would get crazy anxiety and not answer the phone. Dan cottoned on and one day I came in and there was someone else on reception. I don’t think he wanted to tell me because we were friends, so that was when I started playing music.

The first gig I played was at The Head of Steam in Newcastle. I have really vivid memories of my mum arguing with bouncers as I was underage. I was so nervous, god knows what I was like as a performer. I would play everything so quick; I played 12 songs in 12 minutes because I just had to finish.

My style was interesting. I was a hippy but also into the happy hardcore rave scene so it was a mix of the two things. My mum bumped into one of my old school friend’s parents the other day and she said, ‘I remember Beth, she looked like an art installation.’ I always wore the weirdest clothes and when I look back now, I was super-shy and insular but visually I wanted attention.

I loved the movie Almost Famous; that was very influential. I watched it every weekend for 3 years because it was such a good depiction of being a musician in California. Now at my age I have spent so much time in LA and it’s not really that different. Obviously, the world has changed but it’s almost like a time capsule, so that was a big one for me.

I think my mum thought I was a weirdo but she was always very supportive of me being who I was. I know for some people’s parents they would have said you need to get a job like a lawyer. My mum asked what do I want to do and when I said art and music she said that’s fine but figure out a way to monetise it, do anything you like as long as you can pay your rent.

My 16-year-old self would be thrilled that I have made it another 16 years, still doing what I love. I am certainly not rich, and I have had plenty of days when I have only had a can of soup to eat, but I wouldn’t change it. I am so lucky that I was in a home where I was supported and that my mum taught me photoshop when I was 6, which is probably why I am an animator now, and I would be thrilled that I didn’t end up having to get an office job. 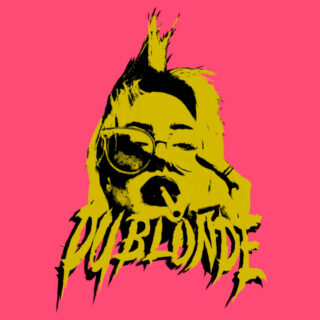 Forgotten what fun feels like? Allow this Du Blonde record to remind you