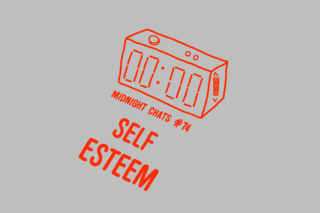 Right now Midnight Chats is on a holiday, a short summer interval where we stack up new podcast episodes for the next series – series 8 – beginning later in the year. So consider this a little between-season snack.

It was The Great Escape in Brighton last month (May). As part of it the festival were kind enough to invite us to record a live episode of Midnight Chats in front of other human beings. Regular listeners will know that we don’t do that too often, but this was fun.

Self Esteem, the solo project of former Slow Club member Rebecca Taylor, joined me in conversation. She was an absolute blast. Among the excitable chat about her imminent appearance on Channel 4’s Sunday Brunch programme with members of the Made In Chelsea cast, there was time to talk about the recently released Slow Club film Our Most Brilliant Friends (not your average band documentary), why she compares her pop career as Self Esteem to Henry VIII and how she’d give it all up to be Peter Gabriel’s backing singer. Or Rod Stewart. Either is fine.