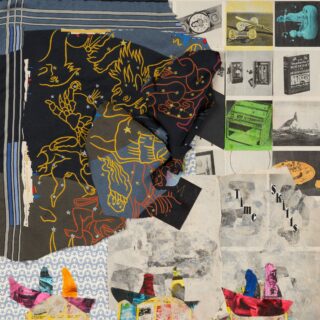 Despite billing Time Skiffs as their first new album in six years, Animal Collective are a band who’ve never really gone away. A succession of EPs and solo projects vividly plugged the gaps of our impatience, while charitable ‘audio-visual’ releases oozed from Baltimore’s psychedelic sewage systems, as if philanthropy was their rationale for making less interesting music. Ideas, after their seminal breakthrough LP Merriweather Post Pavilion, seemed hard to come by, and the confidence with which they classified their formats evaporated with them.

But for a band somewhat defined by their inconsistencies, stirrings of the same ingenuity that reckoned them a defining creative force of the fabled ’00s do rumble here like a sleepy volcano. The sound of keys turning in the ignition rockets into a well-driven space-psych parade; a chirpy glockenspiel becomes the imitative and playful ‘Walker’; ‘Royal and Desire’ sounds like listening to The War on Drugs at the bottom of a wishing well, as gentle melodies range from melismatic to plainchant, slowly reverberating out of earshot. Lead single ‘Prester John’ is still a highlight, knocked off-balance by an outro with woozy, off-beat synths tracing those echoes through an oncoming cosmic traffic. The band sounds audibly more together than in recent years, but all the promise of excitement – a celestial and surreal outreach programme – culminates with muddily mixed vocals and harmonies that morph into one gloopy portion of rice pudding.

Now I love rice pudding as much as the next person, but if Time Skiffs is like listening in on a conversation between old friends, it’s mostly like hearing them reminiscing about the better days. Even the best stories lose their detail over time. Animal Collective’s journey to becoming arena-ready underdogs has been well-marred with false peaks, however distinguished; here, it’s resulted in something reasonably forgettable.