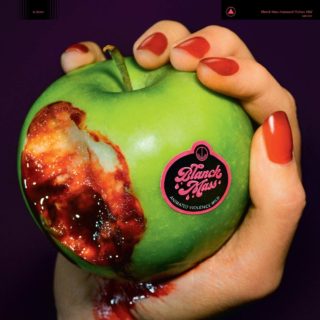 Back in 2010, when Blanck Mass was in its embryonic stages, Benjamin John Power was already wrestling with some of the heavy themes that would shape his future work. Death, nature, science and consumerism have all become creative canons as he’s shifted from the bleak, dark ambience of his self-titled debut through to the danceable Dumb Flesh and the expansive sound of World Eater.

That path of transition and progression leads us to Animated Violence Mild – Power’s fierce take on the “post-industrial, post-enlightenment religion of ourselves where we betray the better instincts of our nature and the future of our own world.” Motivated by that collective mortal apathy, the album reflects the upheaval of these tumultuous times, much in the same way Forest Swords’ 2017 album Compassion brilliantly hit upon similar threads of distress and unrest in its fractured electronica.

The coruscating noise of ‘Death Drop’ and brutal sonic rumble on closer ‘Wings of Hate’ speak to that, as the album’s spiky, discordant bookends, but in between all of that pulsating electricity, Power’s ever-expanding sound palette ensures it doesn’t become an exercise wholly consumed by hapless rage. ‘Creature West Fuqua’ takes a breath, flicking the switch between Wild Light-era 65 Days of Static and surprising, string-driven serenity, whereas ‘No Dice’ steers into sparse, dreamy M83 territory with big drums and bright synths. The undercurrent of tension comes to agitated life on the echoed percussion and snapping, audible garble of ‘House v House’ but it’s on the crunching ‘Love is a Parasite’ where things really flame into life with stabbing synth, dramatic keys and the manic, throaty fury of early noughties DFA 1979. It’s a defiant triumph; the punishing opus anchoring the album in the same brilliant way ‘Rhesus Negative’ did on World Eater.

Ultimately, Animated Violence Mild sounds and feels like a reaction, reflection and continuation of the teeth-baring protest of its predecessor. And while it was easy to interpret almost anything as remonstration with the world a few years ago, there’s more than just anger fuelling album number four: it’s the fact that the grief and uncertainty of a few years ago has transcended the hand-wringing, fist-shaking and name-calling, and evolved into the biting awareness that we’re all probably fucked anyway. Still, when the message is as potent and powerful as Blanck Mass manages here, at least our inglorious demise will have the brutal soundtrack it deserves.