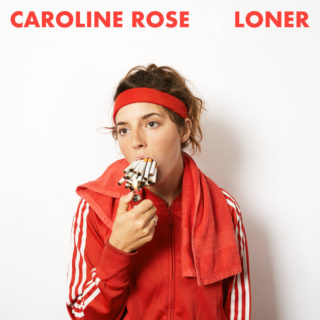 If Caroline Rose is a ‘Loner’, as the title of her second album attests, then its contents confirm that she’s happy not to be one of the in-crowd.

On opening tracking ‘More Of The Same’ the New Yorker rails against the ‘alternative haircuts and straight white teeth’ of fellow partygoers while on ‘Jeannie Becomes A Mom’ she sardonically equates suburban parenthood to ‘real life’.

Navigating the modern world is one of the key themes on the album, which marks a step forward from her 2014 debut’s country blues. Here the music is more widescreen; she’s bought an array of synths and samplers, and her punk roots never detract from her love of Britney Spears. It’s a shift that can at times be cartoonishly bubblegum, especially on the rockabilly ‘Money’ and the pseudo-rap ‘Soul No. 5’, which parodies the souped up cars of rap videos with a bicycle.

Her sarcasm nonetheless hits home hard on the big issues, with female objectification being dealt with on the surf ‘Bikini’ and cut-up ‘Smile!’, which has a series of pitch-shifted voices commanding women to do just that. On the pizzicato strings of ‘Getting To Me’, which deals with anxiety, Rose even drops her candy-coloured guard.

Yet despite the heavy subject matters this is an unashamedly pop record, taking on the attitude of Le Tigre and the pop-dance of Katy Perry. In common with the former, the lyrics make consciousness-raising fun and never get in the way of a brassily memorable chorus.

While you were still hurting from the World Cup, Caroline Rose was chugging beers and covering Céline Dion at her first London gig