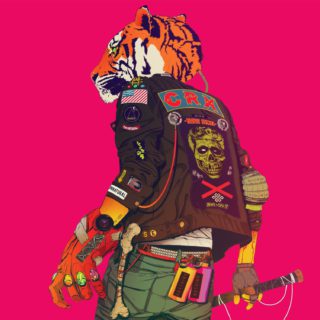 Julian Casablancas and poseur pals the Voidz failed with 2014’s ‘Tyranny’ but the record was nothing if not wildly ambitious, pinging between dozens of ideas and venturing into the kind of dark and scary places the Strokes would never tread – an exciting if ultimately unrewarding listen. Now, with his own side project debut, axe-slinging bandmate Nick Valensi instead proffers a mash-up of the Strokes and Queens of the Stone Age (Josh Homme produces here) that comes off like the sort of anaemic flotsam and jetsam you’d find dumped on the scrag-end of one of those bargain bin Father’s Day rock compilations because it was cheap to licence.

There’s a dearth of everything here, be it musical inventiveness, lyrical conviction or song title ideas (‘One Track Mind’, ‘Slow Down’, ‘On Edge’, ‘Broken Bones’, etc…). Sure, Casablancas took a rightful pasting for the self-indulgence that sunk ‘Tyranny’ but at least he was experimenting. Often on ‘New Skin’, it seems like Valensi is just killing time between Strokes records.