There shouldn’t be anything left to say about a festival set by a band like The Strokes. Interpol get it: 24 hours earlier they turned up at Primavera Sound and rolled out the exact show you’re thinking of even if you’ve never seen them before – black suits, no talking, less moving, ‘Slow Hands’ to end, off. Good stuff. No complaints here. But it was practically impossible to decipher it from any previous show they’ve played since… ever.

The Strokes have certainly had their on-rails years, initially too cool to talk, then too upset with each other to. If you’ve seen them play in a bad mood, you’ll have known about it. The last time they played Primavera, in 2015, was one of those times, with little-to-no crowd interaction and only daggers for one another. Whatever – with The Strokes it still works, and the soap opera of he said he said he said has been reason enough for many to turn out to see where the band of their generation (truth rather than hyperbole) are at now, personally as much as professionally. Plus they have all those bombproof garage rock anthems.

But something has happened to the band in recent years – they’ve started to have a right laugh on stage. Julian Casablancas, especially. Tonight, they sound astonishing (especially Casablancas’ growl), and look like they care while they’re doing it. The setlist is pretty much perfect, featuring what we want (‘Someday’, ‘Hard to Explain’, ‘Juicebox’ etc.) and what we need (the opening ‘Bad Decisions’ is pushed over the edge by collective excitement at the band’s arrival on a stage with neon red trim; ‘The Adults Are Talking’ will make everyone here go back and give The New Abnormal another chance). But what they play and how well they play it is only half of the story. The Strokes have always had the tunes and proficiency in their locker, but rarely this sense of fun, which ultimately all comes from Casablancas being a droll pest from the very beginning. 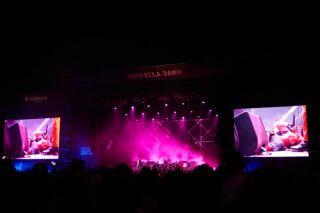 “I guess someone had Covid,” he says after the opener, apologising for the band cancelling last week’s Primavera set. “I think it was Nikolai… Kidding,” he says, not for the last time tonight. “IT WAS MEEEEEEE!” The band don’t launch straight into ‘Hard To Explain’ but wait for Casablancas to ask, “What’s next? ‘Hard To Explain’. Come on then.”

The tone for the evening is set, where the singer’s drooled gags of a half-cut stand-up become as anticipated as the songs themselves. “I’m KIDDING,” he shouts close to the mic whenever he largely bombs (“If I went to this festival I don’t think I’d ever want to listen to music again”), while pockets of the audience laugh with friends and embrace this new era of the band where Casablancas, at least, seems to be enjoying his job like he never has before. “You’re really getting my sweet, raspy Covid voice. I do still have Covid so apologies to the front row… I’m kidding, I’m kidding. Too soon?”. They’re good when he says them.

For the tracks themselves, Casablancas takes a walk and sings lying down more than once. He drops to his knees for ‘Take It Or Leave It’ ­– no longer the closer. The band simply let him get on with it, neither amused or appalled, sounding and looking their best. And when Casablancas sings, it’s no joke – ‘Under Control’ almost sounds like a classic soul number for his vocals; the usually horribly jaunty ‘Under Cover of Darkness’ serves as an unexpectedly convincing final track; in this setting, the silly ‘Brooklyn Bridge to Chorus’ even makes sense. 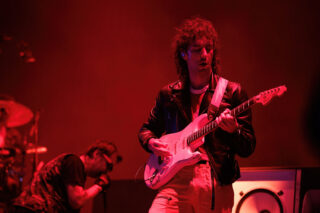 There’s still been no ‘Last Nite’ and the band that don’t do encores has left. They dance back on, but there will still be no ‘Last Nite’. Instead they end in a brave, bizarre, hilarious, trolling manner, with a track nobody really knows, from their 2016 EP Future Present Past, ‘Threat of Joy’. “It’s just for a bit of fun,” Casablancas reasons before the band are gone for good. A fitting curveball of an ending for a show that’s like no other I’ve seen from The Strokes. After years of taking themselves seriously at the cost of unpredictability, The Strokes appear to have entered a new era where they’ll do what they damn please. They’ve certainly earned it. You should go and see their next show – for once, I’ve got no idea what it’ll be like.

The Adults are Talking

Take It or Leave It

Under Cover of Darkness